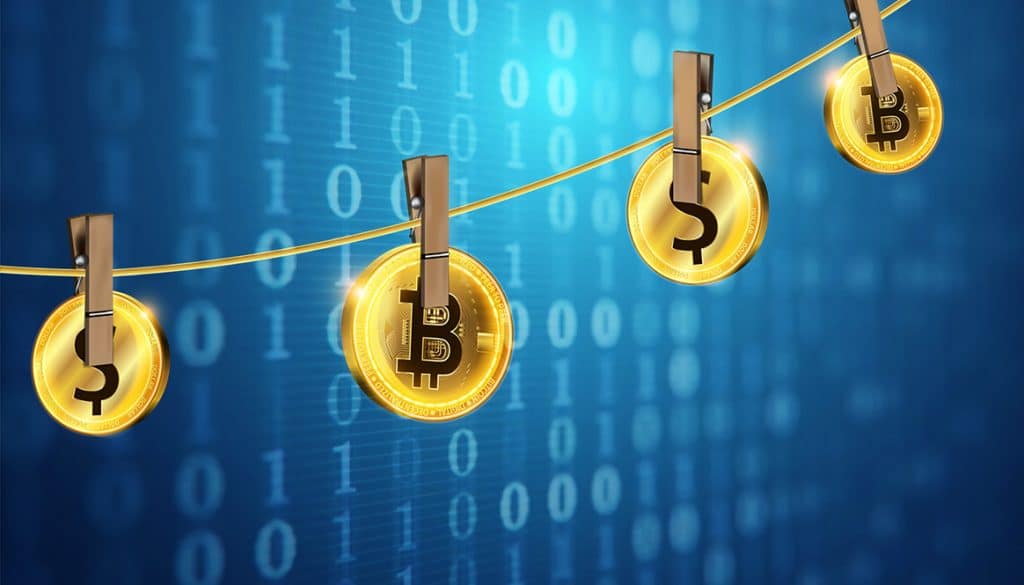 Abstract image of bitcoins and dollar coins Hanging on the ropes, money laundering concepts in decentralized financial platforms by hackers who have to find a way to detect and close loopholes.
Education

Can Cryptocurrency Be Used for “Crypto Money Laundering?”

Why Use Bitcoin or Cryptocurrency for Money Laundering?

Although Bitcoin uses Blockchain technology that is transparent in transactions. Everyone can check all the transaction information and account is transferred to which account but don’t know who owns those accounts because account or wallet used to store, send, and receive Bitcoin is a combination of numbers and English letters.

According to the data, Bitcoin is clearly a great tool for crypto money laundering but for design purposes, blockchain-based transaction data should be safe for money laundering.

Can Bitcoin Be Used for Illegal Transactions?

Currently, Bitcoin is estimated to be used for illicit transactions at just 1%, down from 30% over the past 5 years.

Most of the illicit transactions were used in the sale of drugs through a service called Silk Road. In addition, the camouflage of transaction data may be used for other purposes such as tax evasion or assassination.

Despite the fact that Bitcoin is ideal for crypto money laundering because no documents are required to verify identity. Transactions via Bitcoin require users to bought through a broker or Bitcoin exchange.

Which in each country has a measure for all users who want to trade must go through the process of KYC (Know Your Customer), process of verifying identity. There are no exceptions to prevent money laundering.

Although in bitcoin transactions, it is not known who performed the transaction but in money laundering, cash is required. Therefore, it needs to be traded to bring out the cash. Users have to go through a webtrade or broker and they have to use your own account linked to the bank, which makes it difficult to process money laundering.

Yaya Fanusie, director of analysis at the Defense Democracy Foundation, has worked with the CIA for decades. As a terrorist analyst, and spy for the U.S. Army, the White House, and the law enforcement agency, he explains “The truth is that those terrorists still choose to use cash instead of cryptocurrencies to break the law.” He argues that terrorists currently do not use cryptocurrencies.

In trading illegal things prefer to use cash because it does not leave any traces of trading. Cryptocurrency works with Blockchain technology, although it is not possible to know who transferred it, but it can be traced later. From the traces left in the public accounts and difficult to conceal.

In addition, Mr. Remi Quirion, Quebec’s Chief Scientist, has published a myth-defying paper on the illegal use of Bitcoin. The document, with reference to research conducted by the Center for Sanctions and Illicit Finance of the Defense of Democracies Foundation, states that only 0.61% of illegal transactions from 2013 to 2016 were analyzed as related to cryptocurrencies.

“In recent years, the claims that Bitcoin is being used for crypto money laundering have been increasingly questioned.”

In 2018, a report by the Bitcoin analytics team FDD and Elicit, the legal firm associated with Bitcoin, pointed out that the Bitcoin money laundering rate is only 1% of all transactions.
Some people have been identified as trying to do something illegal with Bitcoin, but they haven’t escaped regulatory scrutiny.

A former Crypto trader and executive of a well-known exchange in the state of Arizona, USA has been Sentenced to 41 Months prison for Drug-Related Bitcoin Money Laundering.

Can Cryptocurrency Be Used for Money Laundering?

From the foregoing, research has shown that cryptocurrencies are not very popular in money laundering because they leave more traces than cash. On the other side, if the method of obtaining Cryptocurrency without the need to go through brokers or exchanges. This will become an option for those who want to launder money. People who use Bitcoin carefully and correct with propose would be able to launder money through Bitcoin safely because even today no one has yet discovered the true identity of Satoshi Nakamoto, the inventor of Bitcoin.