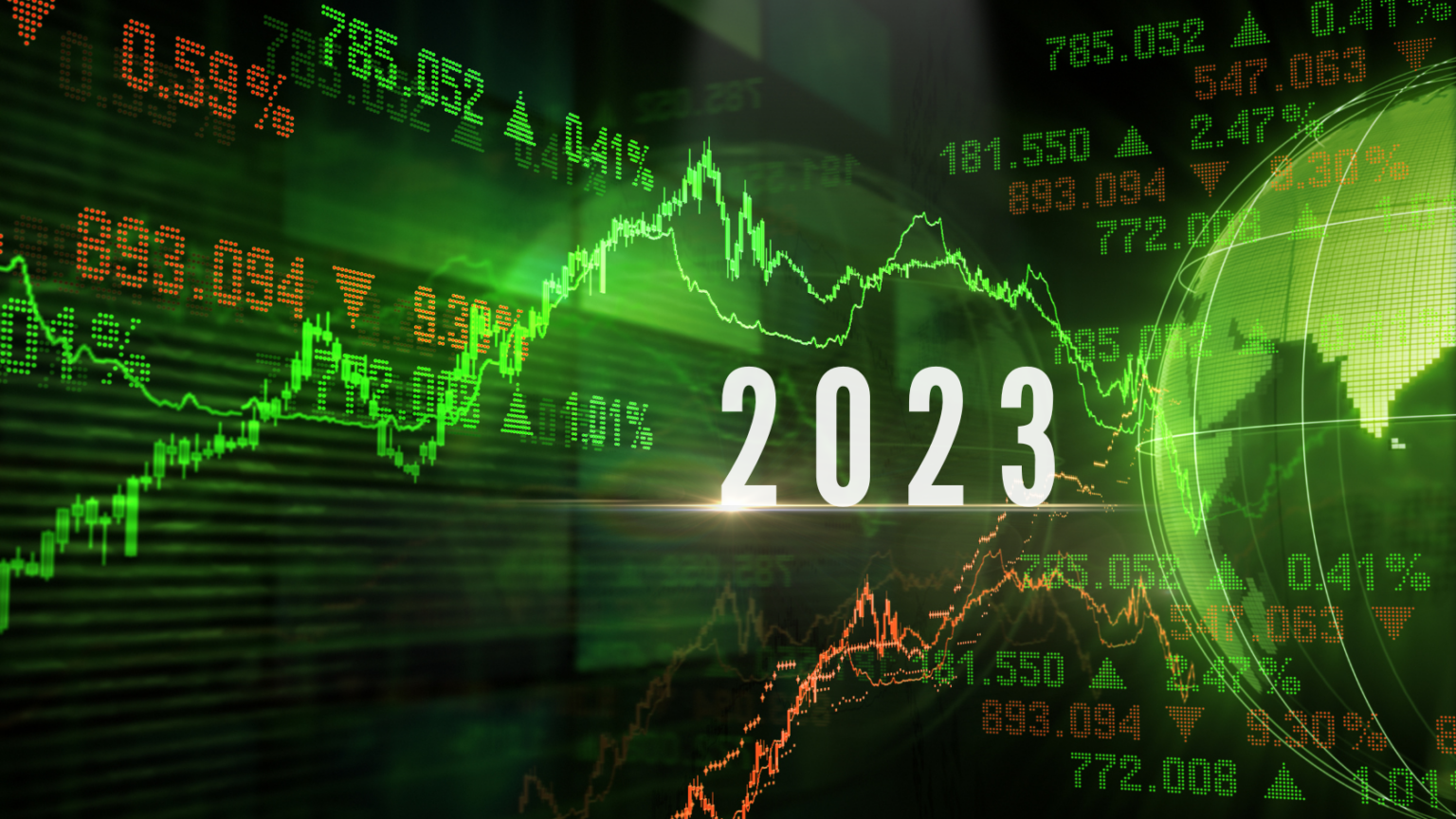 Stock Market Predictions For 2023: Expectations For The Year

A challenging year for financial markets is approaching its conclusion. However, will 2023 be a good year for investment? Are there any stock market predictions? Stocks, bonds, and cryptocurrencies all fared poorly as inflation skyrocketed and the Federal Reserve repeatedly raised interest rates to slow the rise in consumer prices. Since the beginning of the year, both the Dow Jones Industrial Average and the Standard & Poor’s 500 indices have lost roughly 19%. The Nasdaq Composite, which technology companies heavily weigh, has suffered the most significant percentage drop among major benchmarks since the beginning of the year, falling by more than 30%.

In contrast to 2022, characterized by robust growth, high inflation, and hawkish policy, markets are now confronted with a very different backdrop, one in which economic growth is uncertain, and the Federal Reserve is indicating that more rate hikes are coming. According to Morgan Stanley Research’s 2023 forecast, written by the firm’s chief cross-asset strategist Andrew Sheets. (Policymakers who take strong measures to rein in inflation are called “hawks,” and hawkish measures include raising interest rates.)

The following summarizes what analysts predict will happen in the market over the next 12 months.

By Year’s End, the Bear Market Will Still Be In Effect.

Let’s begin with the most pressing concern of investors: to what extent will the market as a whole react in 2023? For the stock market predictions, historical evidence leads us to believe that the bear market on Wall Street will persist well into the new year. Even if the market indexes end the day up slightly, a new bull market will not be declared.

When the economy and stock market are struggling, the Federal Reserve often reduces interest rates to stimulate growth. However, rate reductions are unlikely for quite some time because the central bank is currently fighting off historically high inflation. After interest rates are lowered, the S&P 500 often takes a year to recover.

It’s Predicted That 2023 Will Be a Bad Year for the American Economy Due to Recession.

The second stock market predictions, it’s not out of the question that the U.S. economy will enter a recession this year, which is an expansion on the first forecast. An extended inversion of the yield curve for U.S. Treasuries is a reliable predictor of economic contraction. What I mean by an “inversion” is a situation in which bonds with a more extended maturity date yield less than those with a shorter maturity date. The standard shape of the yield curve is an upward and rightward-sloping curve, with higher yields on bonds with longer maturities.

Although recessions may not follow every inversion of the yield curve, they have preceded every recession that occurred in the post-World War II era. In 2022, the spread between two-year and ten-year Treasury bonds was more comprehensive than in the previous 40 years.

During the Second Half of the Year, the Inverted Yield Curve Associated With Interest Rates Will Begin to Steepen Again.

On the opposite side of the aisle, we anticipate that the yield curve inversion will reverse itself before 2024. Since Wall Street and investors are typically looking ahead, the future of the U.S. economy and Federal Reserve monetary policy should become more apparent as we approach the end of the year.

U.S. Inflation Figures for the Year-End Are Significantly Below Predictions.

The potential economic slowdown in 2023 may have one silver lining: the U.S. inflation rate may be able to fall off its 40-year high of 9.1 percent recorded in June 2021 more swiftly.

Energy commodities, in particular, can take a significant impact during economic downturns. Since crude oil and natural gas prices rose sharply last year, a sharp drop in either might significantly affect the overall inflation rate.

However, it would be best if you didn’t get your expectations up too high, as the Fed’s monetary policy is not expected to change in response to a sudden drop in inflation. Chairman of the Federal Reserve Board Jerome Powell has made it apparent that the Fed is content to wait for inflation to be under control before raising interest rates again.

The Year 2023 Will See Healthcare as the Top-Performing Industry.

While the brunt of the epidemic was behind by the end of 2017, for the stock market predictions, healthcare stocks had a mixed year, with COVID-19-driven companies suffering. Expect healthcare equities to perform well in 2023 due to their defensive characteristics and generally reasonable valuations.

For instance, we have no say over when or what ailments we get, regardless of the state of the U.S. economy or the stock market. No matter the state of the economy, this will always result in a need for healthcare services and products like pharmaceuticals and medical equipment. When equity markets are particularly volatile, healthcare stocks may be a haven.

Stock market predictions in 2023, gold-stock prices can recover and significantly outperform the market as a whole, regardless of the sector in which the company operates.

Economic uncertainty, historically high inflation at least in the first part of the year, and years of relentless money-printing by the U.S. Treasury all make hard assets like gold appear all the more desirable, which might be a positive for precious metals and mining equities this year.

It’s also important to remember that the optimum time to buy gold equities is usually at the start of a bull market. Although I do not anticipate a bull market in 2023, investors may want to prepare for a gold stock bull market that might occur months or even years before the Dow, S&P 500, and Nasdaq Composite indexes officially enter a bull market.

Following a Productive Year, the Energy Sector’s Stocks Will Suffer.

On the other hand, energy stocks may face a challenging year ahead. Crude oil and natural gas spot prices would suffer if a recession materialized in the United States or globally, as I mentioned before.

Another factor to consider is that even though oil and gas prices dropped in the second half of 2022, oil and gas stock prices barely budged. The disconnect between energy commodity prices and oil and gas drillers over the past few months may have disastrous consequences once investors catch on.

Apple (AAPL 0.41%), the most valuable public business in the United States, saw its market capitalization drop below $2 trillion last week. The company’s stock price hit its lowest level ($124) since June 2021. When 2023 rolls along, I anticipate Apple’s stock price dropping below $100 and into the tens.

Apple’s growth pace has slowed dramatically, despite the continued success of its services division and the company’s commanding control of the U.S. smartphone market. The lack of significant improvements over the iPhone 13 and offshore supply chain issues may also contribute to the slowdown.

Also, with interest rates rising, Apple can no longer tap into the cheap debt it previously used to speed up share repurchases when the timing was right. A price-to-earnings ratio of approximately 21 isn’t that inexpensive, considering Wall Street’s tepid sales growth forecast for 2023 (3%).

By the End of 2023, Toyota Will Have the Greatest Automotive Market Capitalization in the World.

A little over a year ago, Tesla (TSLA 5.93%), an electric vehicle (EV) manufacturer, was valued at over $1 trillion, surpassing the market capitalization of all publicly traded legacy automakers combined. By the end of trading on Thursday, January 4, Tesla’s market cap had fallen to $409 billion. I anticipate that by the end of 2023, Toyota Motor’s market valuation (now $187 billion) will have surpassed Tesla’s (currently $130 billion).

Investors are beginning to understand that Tesla isn’t safe from the industry-wide supply chain, inflationary, and demand-based headwinds. They also accept that Elon Musk is a significant risk for Tesla.

The Performance of Chinese Stocks Will Much Exceed That of American Ones.

China’s handling of the COVID-19 outbreak has been the country’s most pressing problem for nearly three years. Supply chains were hampered, and provinces were placed in what seemed like random lockdowns due to the country’s zero-COVID plan. By abandoning this course of action and ripping off the Band-Aid, China will allow the short-term agony, i.e., widespread COVID-19 infection, to be followed by real economic development and opportunity in the second half of 2023.

It creates favorable conditions for the success of low-priced Chinese growth firms like Baidu and JD.com.

Potential 20% Drop In Housing Values Across the U.S.

There’s little hope that 2019 will be a good year for the home market. Over the past decade, homebuyers and refinancers have become spoilt by historically low mortgage rates. But as the 30-year mortgage rate soared to a 16-year high of approximately 7% last year, homebuying and refinancing activity halted. The housing market fluctuates based on supply and demand. When demand drops, prices nearly always go down as well. I anticipate a 20% decline in property values in the coming year.

The bright side is that a 20% drop in U.S. home prices is expected to stimulate demand, at least among cash purchasers. This measure intends to avoid a meltdown of the housing market on the same scale as in 2008.

There Will Be a Financial Meltdown, Likely Caused by Subprime Auto Loans.

The final prediction for 2023 is the occurrence of a financial collapse or a pandemic. However, given the frequency with which crises and infectious disease outbreaks occur, this is hardly a revolutionary assertion.

An audacious forecast pinpoints the source of the impending disaster. The assumption is that it occurs in the subprime auto loan market. The percentage of subprime borrowers who were at least 61 days behind on their car payments in October 2022 rose to 5.13% from 3.76% the previous year. Several factors may work against people with low credit scores in the coming year, including rising prices, an expected rise in the unemployment rate in 2023, and the termination of pandemic-related financial assistance programs.

Even if a subprime auto loan credit crisis wouldn’t as big as the financial crisis of 2008, it would still be terrible for bank stocks and the auto sector.

Though it may be discouraging to think that the stock market has at least one more rough year ahead, investors must be prepared to hold firm.

Many financial experts advise keeping your money in the market even when it’s down, if possible. If you follow this plan, you won’t have to worry about failing and will be in a position to benefit from the healing immediately.

The anxiety caused by the market’s volatility can be reduced by keeping the long view in mind. According to Philip Straehl, head of capital markets and asset allocation for Morningstar’s Investment Management department, investors should be optimistic.

He predicted that “the 2022 slump has laid the ground for a much-improved long-term investing environment” this month in a report on the year 2023.